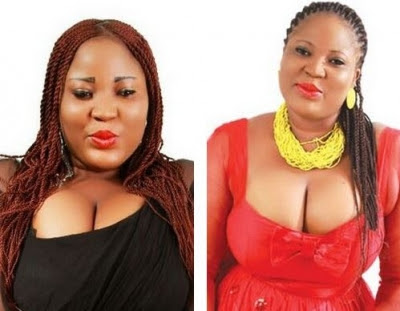 Well-endowed and pretty upcoming Yoruba movie actress, Enita Odugbemi has revealed that apart from her excellent acting talents, the next thing that brings her attention – which sometimes are unwanted - are her big, voluptuous boobs.
According to her, “I love my boobs so much and I thank God because he gave them to me. I don’t deliberate expose my body or boobs. People only tend to notice them because they are very big,” she said.

She also recounted during a chat with potpourri that her boobs have also caused her some embarrassments on some few occasions. “Yes, that was at Oxford Street in London. I was at Oxford Street to do some shopping so this young man walked up to me and said my face looked familiar. Later, he said he could recall that I am an actress. I smiled and he requested to take a picture with me.

I agreed. The next moment, I realized he was trying to touch my boobs. I slapped him immediately. I later realized slapping him isn’t a good thing. I apologized and kissed him. He smiled and now we are good friends”
Posted by Unknown at 7:08 AM