PRESIDENT OBAMA ISSUES ADVICE TO KANYE WEST, AHEAD OF PRESIDENTIAL RUN IN 2020 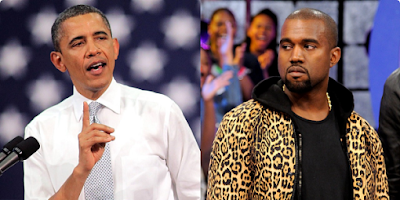 The president took time to give West advice after the emcee announced at the MTV Video Music Awards that he is running for president in the 2020 campaign. According to Variety Obama said: ‘You’ve got to deal with strange characters who behave as if they are on a reality TV show’, Obama says. ‘Saying you have a beautiful dark twisted fantasy — that’s what’s known as off-message in politics.’

West released My Beautiful Dark Twisted Fantasy in 2010. Obama kept the speech light-hearted, joking about all the people who think West’s election is impossible.

‘Do you really think this country is going to elect a Black guy from the south side of Chicago with a funny name to be president of the U.S.?’ West’s run has received comment from 2016 presidential candidates Hillary Clinton, Donald Trump and Ben Carson....