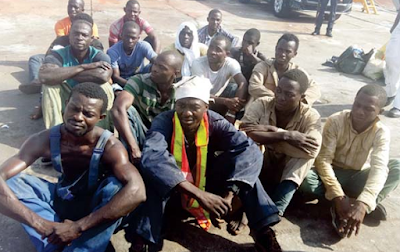 The Nigerian Navy (NN) yesterday apprehended 16 suspects including a Liberian who illegally boarded a merchant vessel in a bid to go to the United States (US)
Fidelis Nsikak, Tobi Owoyele, Roland Richard, Edward Riy, Chima Eze, Arinze Pascal, Isaiah Smart, Taofeeq Lawal, Morphy Oche,  Ridwan Abdulahi, Kingsley Chukwu, Suleiman Quadri,  Ebuka Stephen, Ebuka Eze, Afeez Ariyo and Chikwendu Oyimedu were said to have stayed onboard the ship for about three days.
The suspects, said to be casual workers at the port, it was gathered, sneaked into the vessel which had come to offload cements.

It was gathered that 11 mobile phones and bags containing clothes and other personal items were recovered from them.
Nsikak told The Nation  he had to leave the country by all means because he was tired of poverty.

“I studied Electrical Engineering but got no job. I have been trying to do menial jobs yet, things are very hard. So, I started working casually at the port with the hope that one day, I would get the opportunity to leave this country.
“I was onboard the shop for three days. I entered through the terminal as a casual worker. I planned my movement and had some food items and other things in my bag,” he said.

“We received a distress call from the vessel on Friday morning notifying the navy of the presence of aliens on their vessel. Hence NNS KARADUWA, which was at sea, was deployed to the area.
“In the course of arresting them, one of the suspects tried jumping and he sustained shoulder injury. He was taken to the hospital for treatment.
“Preliminary investigation revealed that they were 15 Nigerians and a Liberian and they all boarded the ship with the hope of going to the U.S. for greener pastures.  They will be handed over to the Nigerian Immigration Service (NIS) at the conclusion of investigation.”

The Nation
Posted by Unknown at 3:06 PM