Photos: One suspect killed as police engage in gun battle with kidnappers who came to pick ransom in Abia State 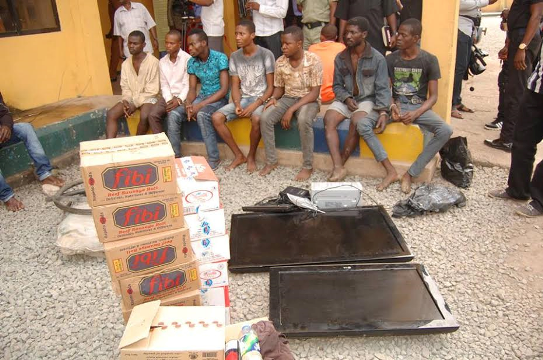 Briefing newsmen on Tuesday, January 17th, at the command headquarters in Umuahia, at the Commissioner of Police, CP. Leye Oyebade, said operatives of the Special Anti Robbery Squad (SARS) Owerrinta, on January 10, 2017 had an encounter with kidnappers,

who came to pick ransom of Five Hundred Naira (N500,000.O0), from one Sabastine Azubuogu of No. 23 Umuodu Street Abayi Aba. After the exchange of fire that ensued, one of the suspects was arrested with bullet wound and taken to hospital where he was confirmed dead. Recovered from his body were four live cartridges. However, effort is on top gear to arrest other fleeing suspects.

On January 9th, operatives of the Anti-Kidnapping Section of the State Criminal and Intelligence Department, Umuahia, acting on information received, arrested one CHIMAOBI KALU ‘m’ aged 29 years of Ovim in Isuikwuato Local Government Area, but resides at Umubia Olokolo Umuahia South, who with two others at large robbed one Tobi Ojekayode of New Heaven Estate Olokolo of the sum of Fifty Thousand Naira N50,000.00 at gun point and attempted to rape his wife before he was apprehended.
Recovered from the suspect is an iron in gun like shape. Investigation is ongoing and he will be arraigned in court appropriately.
The patrol team attached to the Central Police Station Aba, on 10/01/2017 along Eziukwu Road Aba arrested one DANIEL ARIYO ’m’ 19 years and PRINCE KALU ‘m’ 20 years, who specializes in robbing innocent members of the public of their valuables within the area.
Items recovered from them include
1. One Techno handset
2. The sum of Five Thousand Naira (N5,000.00)
Victims identified the suspects as those that robbed them few hours before they were apprehended by the Police.
ARREST OF SUSPECTED EEDC CABLE VANDALS:
The Police operatives attached to Central Police Station, Aba, while on patrol along Ekenna Avenue by City Global Aba on 04/01/2017, arrested one OGBONNA IFEGWU ‘m’ 32 years and OBIOMA IWU ‘m’ 22 years, they were in possession of EEDC armored cables worth 1.2 million naira stocked in four sack bags.

The suspects took to their heels on sighting the Police, but were chased and apprehended.
The intelligence led raid strategy of the Command also paid off, when the operatives of the Obehie Police Station, on 07/01/2017 arrested one DAVID JITE ‘m’ aged 18 years of Umuelechi Obuzor Asa, with EEDC cables and motor battery. Investigation is ongoing.
ARREST OF SUSPECTED BURGLARS:
On 04/01/2017, the operatives of Central Police Station Aba, arrested the following suspects; OKENWA OGBONNA ‘m’ 25 years, OBIOMA GOODLUCK ‘m’ 27 years, VICTOR ABARUE and VALENTINE OKO ‘m’ 26 years, who burgled the house of one Henry Nkobi ‘m’ of Ehere Road Ogbor Hill, Aba, when he travelled to his village for the Christmas and New Year celebrations.
Items recovered from them include; One Advent Laptop, Two desktop monitor, Three HP CPU, Three computer keyboards, Two computer mouse, One V.G.A cables, One techno phone, One blackberry phone, One ITEL phone, One SAM 4S printer, One MTN modem, Two Laptop chargers, One standing fan, One Elemax generating set, One VEEDA printer and One TP link.
The operatives attached to the Central Police Station Aba, on 14/01/2017, arrested one JOSEPH EKE ‘m’ aged 26 years, who sneaked into the office of Champion Pools at No 81 Azikwe Road Aba, during working hours and hid himself in the toilet and when the occupants left, he burgled the office.
i. Items recovered from the suspect include; One Million Six Hundred and Thirty Five Thousand, Six Hundred and Seventy Five Naira only (N1,635,675.00).
ii. One plasmas television.
ARREST OF SUSPECTED FRAUDSTERS:
The operatives of the Ohuru Isimiri Division in Aba, acting on intelligence gathered, on 6/1/2017 at Givers Hotel Osusu Obingwa, arrested one UCHE UZOMA ‘m’ and PHILIP NWACHUKWU ‘m’, who fraudulently obtained the sum of Nine Hundred Naira (N900,000.00) from Commander Benedict Nwaokorie of Akaso Naval Barrack in Port-Harcourt, with the pretence to supply him with Seven-Up products.
ARREST OF NOTORIOUS GANGSTERS:
Acting on intelligence gathered, the Anti-Kidnapping Section of the State Intelligence Department Umuahia, on 10/01/2017 arrested the following suspects; IFEGWU KALU ‘m’ aged 34 years aka ‘ESKIMO’, NKEIRU JOHN IWUOHA ‘m’ 40 years aka ‘DAMAGE’, CHUKWU OGBONNAYA ‘m’ 26 years and ONYEBUCHI KALU ‘m’ 24 years, all of Elughu Nkporo in Ohafia Local Government Area, they have been terrorizing the area and its environs.

The suspects have confessed to the crime and effort is been intensified to apprehend other fleeing members of the gang.
ARREST OF SUSPECT WHO REPACKAGE EXPIRED FOOD PRODUCTS:
The operatives of the Central Police Station Aba, acting on intelligence gathered, on 10/01/2017 arrested one NNENNA SUNDAY ‘f’ aged 28 years of Ukaegbu Road Ogbor Hill Aba, who specializes in using chemicals to erase the batch production numbers and expiring dates of snacks.
Items recovered from her include;

i. Cartons of expired Snacks, such as FUN COOKIES, CHI SPER BITES BEEF, SAUSAGE ROLL, FIBI BEEF SAUSAGE AND GALA.
ii. Chemicals
iii. Re-Packed Cartons of the snacks ready for sale.
The suspect confessed to the crime and effort is on top gear to apprehend other fleeing members of the syndicate.
UNLAWFUL POSSESSION OF FIREARM AND RECOVERY OF ARM:
On 03/01/2017.
The operatives attached to the Isuikwuato Police Station arrested one ONYEMAECHI AGBAM ‘m’ of Umuasua Isuikwuato, with a locally made pistol.
The suspect was unable to give a satisfactory account how he comes about the firearm.
ARREST OF ARMED ROBBERY SUSPECTS AND RECOVERY OF ARMS AND AMMUNITION:
The operatives of the Special Anti Robbery Squad (SARS) stationed at Owerrinta, on 11/01/2017, acting on a tip off arrested NWAFOR HENRY ‘m’ aged 26 years, CHINEDU CHRISTOPHER ‘m’ aged 27 years and ONYEMAECHI EMMANUEL ‘m’ aged 34 years.
The suspects are members of a four man robbery gang terrorizing residents of Umuojima village in Osisioma Aba.
Items recovered from them include
i. Two locally made pistols.
ii. Four live cartridges.
RECOVERY OF MTN BATTERIES AND ACCESSORIES:
Police operatives attached to Ogbor Hill Division Aba, in synergy with the Ogbor Hill Vigilante group, on 15/01/2017, intercepted a Mitshibushi L300 Bus with reg. no SSM 522 XA carrying Sixteen (16) heavy duty batteries. The suspects on sighting the Police took to their heels and abandoned the batteries and accessories.
Effort is being intensified towards arresting the fleeing hoodlums.
ARREST OF SUSPECTED ARMED ROBBER:
The police operatives of Ohuru Isimiri Division Aba, on 11/01/2017 arrested one EMEKA IKONNE ‘m’ aged 29 years, who among others now at large robbed one Ngozi Eze John ‘f’ of No. 22 Obohia Road Aba, of her ITEL phone at gun point.
The ITEL phone was recovered from him and the suspect confessed to the crime and he is helping police in its investigation.
All the suspects will be arraigned in court appropriately.
More photos below... 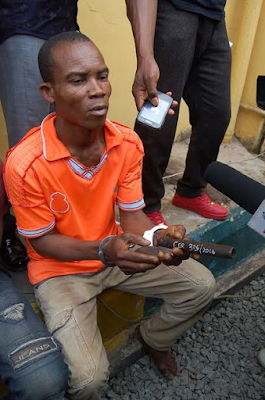 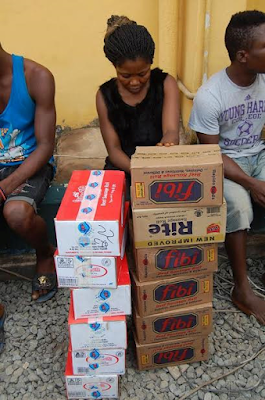 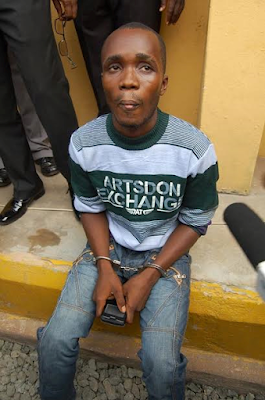 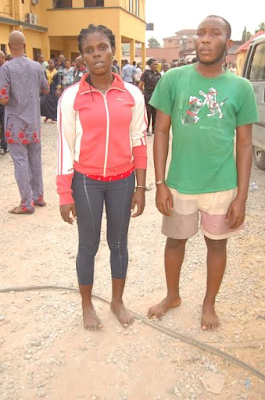 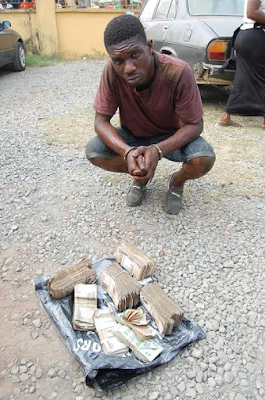 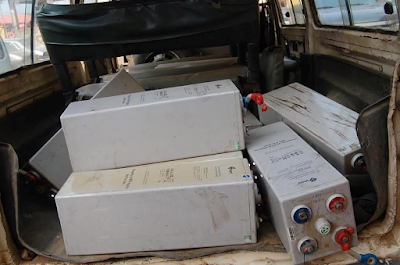