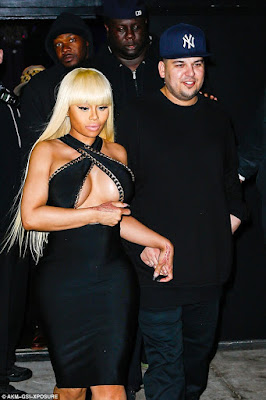 Their latest separation was said to be maturely executed and far less dramatic than the first.

But it doesn't sound as though Rob Kardashian is fairing all that well.

A source for People claims that things have been quite rough for the 29-year-old reality television star, who welcomed baby Dream along with Blac Chyna, 28, back in November.

Since the pair called off their engagement in January, the Kardashian clan has reportedly been 'very concerned' about the direction of Rob's life, which was also described as 'a mess.'

'He is not in a state to care for [Dream] by himself,' said the source, which would explain why 'he is spending time with Dream, but never alone.'

'He's 'very unhealthy — both physically and emotionally,' with the source adding 'he isn’t taking care of himself. He eats junk and doesn’t exercise.'

That's of course a serious concern, as Rob was diagnosed with Type 2 diabetes after a hospitalization back in 2015.

The source also clarified why the split has taken such a toll on Rob, claiming 'as much as they fought, Chyna has been the only one to keep him in check.'

In an even more dire statement, the source added 'Rob’s family hasn’t been able to get through to him and get him to change. Without Chyna in his life, things are not going well for Rob.'