Finally, a proven system to rapidly accelerate your career #YouthAccelerate 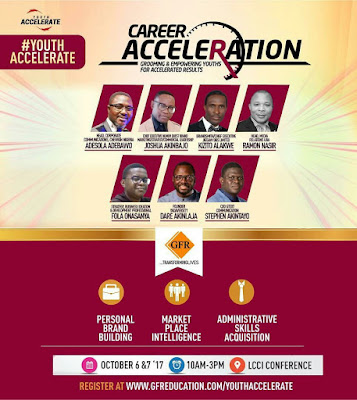 #YouthAccelerate is a training program for young graduates, fresh professionals, and business starters. It is carefully put together to help them launch into their colorful future. Poised to equip you with marketplace intelligence, relevant administrative skills and personal branding tactics... This was designed to make a clear difference.

The unemployment rate in Nigeria increased to 14.2% in the last quarter of 2016. It's highest since 2009 as the number of unemployed went up by over 8million as at Dec 2016; leaving 61.6% of Nigerian youths unemployed.
In 2017 alone, banks sacked 360workers every week from January to June. National Bureau of Statistics(NBS) revealed that 8,663 workers lost their jobs in the first half of 2017. Yet everyday, thousands  enter the labour market.
Finally, a proven system to rapidly accelerate your career, create your own, land the job faster than you think & keep it. Spend time with our seasoned professionals, Speaker who themselves had gotten promoted when their companies where downsizing. What did they do? How did they do it? How did they even get such lucrative careers?
THIS IS an UNSCRIPTED event that will cause you to be distinguished.
ONE OF OUR SPEAKERS HAS MADE PAYMENT FOR 100 SEATS.....REGISTER THIS MINUTE TO BE PART OF THE LUCKY 100
Speakers include:
Adesola Adebawo Head, Communications Chevron
Ramon Nasir Head, Media Relations UBA
Kizito Alakwe Brandsmith,CEO JigSawDBS Limited
Joshua Akinbanjo CEO Numuv Quest
Fola Onasanya Strategy,Business Ideation & Devpt Professional
Dare Akinlaja Founder, Yadaversity.
Stephen Akintayo CEO, GText Group
Date: October 6-7, 2017
Venue: LCCI Conference Centre, behind Maruwa Gardens Estate, Alausa, Ikeja.
Register at www.gfreducation.com/youthaccelerate
Or Call: 08183420344
#YouthAccelerate
Posted by Unknown at 10:52 AM