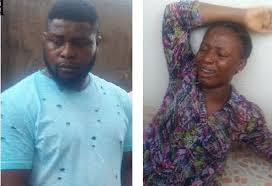 Emotions ran high in Ajah area of Lagos after twin boys were caught in a homosexual act, Tuesday.

The children, in a video clip that was prevented from going viral by Lagos State Police Command, were seen kissing and practising the act before their mother, Patience Ishua, who shot the clip.

Ishua, thereafter, sent the video to her estranged husband, Emmanuel Ekanta, a businessman, who on his part, reported to the Police, in an apparent move to take custody of his children.

Vanguard gathered that the twins could have been victims of the act long before it came to limelight, as they were reported by their teachers to be stooling blood.


Disturbed by the video clip, the Commissioner of Police, Lagos State Police Command, Imohimi Edgal, led officials of the Child Protection Unit of the Ministry of Youths and Social Development, to 2, Olugbemiga Ladipo Street, Lekki, where the children were taken from their mother, pending when investigation on how the children mastered the act would be concluded.

According to her, “I shot the video clip and sent it to him to see the damage he has done to the children. He left me for an old woman. He usually comes to pick the children but whenever they return, they would be acting strangely and be speaking vulgar words. At times, they would complain of pains in their anus.

“Their teacher even said they were stooling blood. When I complained to him, he would not listen. The first day I saw them doing it was when I videoed them as evidence, my Pastor is even aware of the case.

“They have conducted deliverance on them. At a point, I told him to stop taking my children to his place because he has different people he brought from Cameroun staying with him.”

At a point, she burst into tears when it dawned on her that her children would not be in her custody for a while.
She said: ”This is actually my fault because this guy is supposed to be my husband and this case should not have gone to the Police. I feel I have failed as a mother.”
On his part, Ekanta, described Ishua’s claim as false, saying she never brought to his notice the act, except the video clip.
He said: “I was so shocked seeing the clip because she did not even express any surprise while taking the shot, nor scold them. We separated barely a year because she was extremely violent.”
Edgal informed that the matter would be taken before the law court to determine the suitability for parenthood.
Posted by Unknown at 1:04 AM