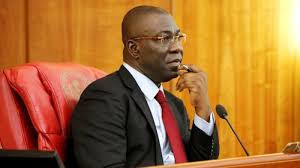 The deputy Senate President, Mr. Ike Ekweremadu, on Tuesday, challenged the powers of the Federal High Court in Abuja to grant interim ownership of his 22 properties to the Federal Government.

Ekweremadu, via a motion he filed through his lead counsel, Chief Adegboyega Awomolo, SAN, maintained that under the 1999 Constitution, as amended, the high court, lacked the jurisdiction to entertain and exercise judicial powers in matter related to, connected with and arising from the Code of Conduct and Declaration of Assets.

It will be recalled that FG had in an ex-parte motion marked FHC/ABJ/CS/284/2018, applied for an interim order temporarily attaching/forfeiting Ekweremadu’s properties to it, pending the conclusion of further inquiry/investigation by the Special Presidential Investigation Panel for the Recovery of Public Property and/or possible arraignment of the Respondent.


Nine of the properties FG asked the court to freeze because they were not declared by the embattled lawmaker, are in Abuja; two of them in London, the United Kingdom; eight in Dubai, the United Arab Emirates; and three in Florida, the United States.

However, Ekweremadu, in his counter-motion, told the court that the Chief Okoi Obono-Oblah led Special Presidential Investigation Panel that is moving to seize his properties for the government “is an illegal body”, saying it was not created under any law made by the National Assembly.

“The so called Special Panel was never Gazetted in any publication in the Federal Government of Nigeria Gazette. The President and Commander-in-Chief never inaugurated any panel anytime and anywhere in Nigeria”, he argued.

He contended that the Panel lacked the locus standi, competence and legal vires to receive complaints, investigate and initiate legal proceedings in matters connected with assets he declared to the Code of Conduct Bureau in 2007 and 2015.

While refuting allegation that he did not declare all his assets, Ekweremadu, in a nine paragraphed affidavit deposed to by one John Amoke, alleged that contents of a Will he lodged at the Probate Registry of the High Court of Justice of Enugu State, was tampered with and unlawfully altered by retired Chief Judge of the state, Justice Innocent Azubike Umezulike.

Vanguard
Posted by Unknown at 9:02 AM