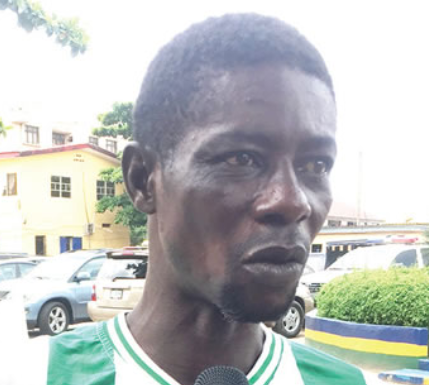 The Lagos state police command has arrested Achibong Koko, a laborer, for allegedly defiling a five-year-old girl at their residenci in Abule-Oshin, a surbub in the state.
Parading the suspect before newsmen at the state command yesterday June 27th, the state commissioner of police, Edgal Imohimi, said

'Information was received by the Divisional Police Officer, Onireke division, that a five-year-old girl had been defiled. A team of detectives was mobilised to the area, where the suspect, Achibong Koko, was arrested. According to the mother of the victim, the daughter left her room while she was asleep. She added that the girl was  violated while she slept. However, she noticed that the daughter was not walking properly, so she questioned her. The girl revealed that the suspect took advantage of her. The victim was taken to a hospital where a doctor carried out an examination. The examination report revealed that the hymen of the victim had been ruptured as a result of the defilement.”

The mother of the victim, Umoru Hajara,said she was asleep when the suspect took her daughter aside and defiled her. When she woke up, she noticed that her daughter wasn't walking properly. She checked and saw sperm on her daughter's vagina.


“I never knew she was no longer beside me. My aunt, who observed the way my daughter was walking, woke me up. When I saw her as well, I was forced to check her. I pulled down her pants and saw sperms on her body. I asked her who did it and she pointed to a particular room.  When we got there, we didn’t meet anyone. I went to report to the leader of my area, Alhaji Bello. But unknown to us, the suspect was in his friend’s room. Both of them were called out, and they asked my daughter who violated her. She pointed at him.”

The suspect denied the allegation saying he did not see the girl at all on the alleged day of the incident.


“I did not do anything to the girl. I did not even see the girl that afternoon. I was sleeping in my neighbour’s house around 3pm when I heard a noise outside. My friend told me that people were looking for us outside. They said the small girl had been defiled and that when they asked her who did it, she pointed at my room. The girl pointed at me at home and in the station that I did it; I don’t know why. Maybe because we stay in the same compound.”