Middle-aged man tied to a stake, given the beating of his life by angry youths for raping 7-year-old girl in Warri 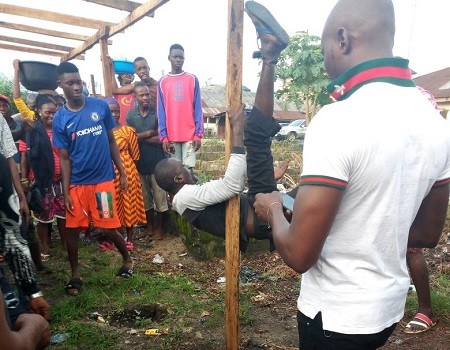 A middle-aged man was severly beaten after he was caught raping a seven-year-old girl at Odion in Wa?ri District, Delta State

The suspect identified as Tenimu, an ex-convict, who has always been in and out of prison, was allegedly caught in the act at about 4:00 p.m on Saturday, July 14.

According to reports, after the suspect confessed to the crime, youths in the community tied him to a stake and gave him the beating of his life.
It was gathered that he allegedly lured the victim to a hideout and defiled her.
Posted by Unknown at 8:33 AM