Plantashun Boiz At War: 2Face Suing Me For N50million - Blackface Cries Out

It looks like the beef between 2Face and Blackface just got serious, as the singer just threw a N50million lawsuit on his former friend, Blackface. 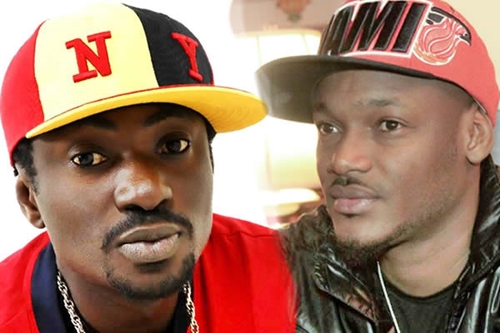 Blackface and 2Face
Former member of the defunct Plantashun Boiz music trio, Blackface, has taken to his Instagram page to reveal to his fans that he is being sued for N50million by his former bandmate, Innocent ‘2Face’ Idibia.
According to Blackface, real names, Ahmedu Augustine Obiabo, 2face, now known as 2Baba is suing him over his age-long claim that he wrote ‘Let Somebody Love You’ and ‘African Queen’, the latter’s biggest song to date.
In a post on Instagram, Blackface said: “2face Idibia @official2baba & his manager Efe Omorogbe @efeomorogbe sued me for 50Million. They (are) claiming I didn’t write #letsomebodyloveyou & #africanqueen (and) what else?
“Just about time me and my legal team (file) for #mydefence. After which I will release my album #risingsun (defendervol2).”
Recall that 2Baba had in May 2017, asked his former collaborator to apologise for making defamatory statements or face legal action.
In a letter sent through his lawyers, Seun Omotoba & Co, 2Baba demanded that Blackface retract his comments.
Blackface, has over the years levelled allegations of song theft and failure to give him songwriting credits against 2Baba. He has accused the iconic singer of orchestrating his marginalisation in the music industry.
Blackface, 2Baba and Faze, members of Plantashun Boiz, reunited in 2007 for an album called ‘Plan B’.
Posted by Unknown at 9:36 AM