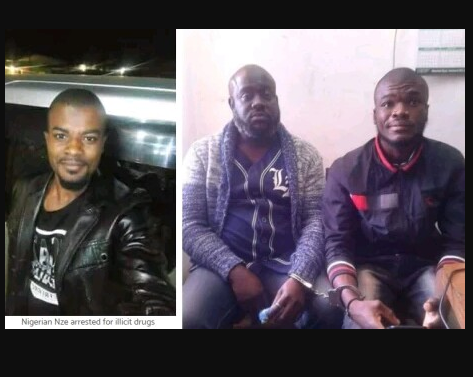 Three Nigerian nationals has been arrested in Malawi over alleged connection with their alleged involvement in the illicit drug trade in the country. The authorities arrested 27-year-old Nze Chidiebere on Thursday in Blantyre on allegations that he was dealing in an illegal Chamba trade.
The suspect was found with four parcels weighing 4 Kilogrammes ( kgs ) of Cannabis Sativa and has since admitted to have sent the rest while using fake Malawian names like Ernest Makhaza and Patricia Banda.

” Yes that’s the deeds of dealers, based in Lilongwe but committing a Crime in Blantyre all to disguise the evil deeds,” said Chitonde.

The two other Nigerian suspects, Collins Okoligwe Amaech, 30, and Kingsley Olisa were arrested in Lilongwe for allegedly dealing in drugs.

According to the Police, the two who were on the run since ‘Operation Clean Area 47 of Drugs’ started in May this year, were arrested at Mississippi Lodge in Mtandire Township in the capital.

National police deputy spokesman, Thomeck Nyaude said the duo will appear before the Lilongwe Magistrate Court to answer charges of being found in possession of dangerous drugs, an offence that attracts a minimum of five years imprisonment if found guilty.

“We arrested the two after a tip-off and we discovered that after the operation to flush out drug traffickers in Area 47 started, the two chose to leave their homes and started dwelling in lodges,” said Nyaude.
Posted by Unknown at 3:45 PM