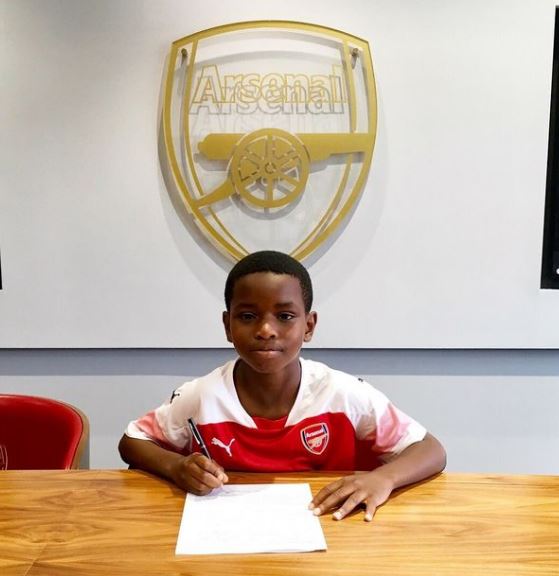 Arsenal have signed nine-year-old Jayden Adetiba, who they discovered in South Africa. Nigeria-born Adetiba has signed a deal with the Gunners, after spending five weeks on trial, under the watch of the club’s academy bosses.

The wonderkid, who has lived in the UK previously, has spent most of his life in South Africa, where he played for SuperSport United Soccer School. Adetiba’s father, John, shared an image of the youngster signing his deal on his Twitter account.
He wrote:
“The little man joins the big club!!”

Speaking to The Sun UK, the nine-year-old said:
“I thank God and my parents for this. I am very happy.
“I train three times a week at the academy and we have a match at the weekend. “The amazing thing is, I have always been an Arsenal fan and I will work hard every day to make the first team.”
Posted by Unknown at 2:12 PM

Email ThisBlogThis!Share to TwitterShare to FacebookShare to Pinterest
Labels: Sports