Dreaded Cult Member Gunned Down, After a Gun Battle With Police in Lagos (Photo) 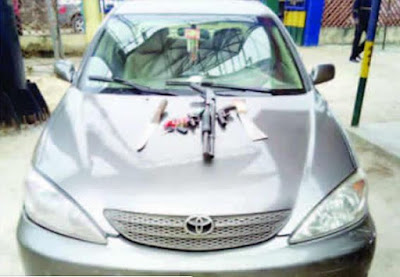 A person has been killed after operatives of the Lagos State Police Command clashed with some suspected cult members in the Owode area of Lagos State on Wednesday.

The operatives had reportedly received a report that the hoodlums allegedly stabbed a rival cult member, Sylvester Chikwendu, to death in the Alapera area of the state.

The policemen were said to have ambushed the suspects at Thomas bus stop, Owode.

The state Police Public Relations Officer, CSP Chike Oti, in a statement on Thursday, said in a bid to evade arrest, the cult members opened fire on the police team, adding that the operatives fired back.

A member of the group was said to have been hit by a bullet and died on the spot.

Oti noted that other members of the gang fled with bullet wounds, adding that their operational vehicle and ammunition were recovered from the scene.

He appealed to health care professionals, including native doctors and other care givers, to be on the lookout for patients with gunshot wounds and inform the police within two hours of commencement of treatment in line with the Compulsory Treatment of Victims of Gunshot Act.”
Posted by Unknown at 4:40 AM