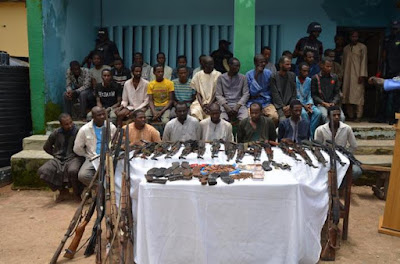 The police on Tuesday announced the arrest of two suspected kidnappers who abducted an Islamic cleric, Mohammed Algarkawy, and killed four operatives of the Intelligence Response Team a few days later.
Mr Algarkawi, a resident of Kinkinau area of Kaduna State, was kidnapped on August 1 at his farm at Nariya, a community along Kaduna eastern bye-pass.

The suspects also confessed to being part of the gang that laid ambush and killed the policemen on August 12, while investigating the abduction of Mr Algarkawy.

“The suspects confessed to be responsible for the kidnap of Sheik Mohammed Ahmed Algarkawi and collection N12million ransom.

“Investigation into the matter is being concluded and suspects will be arraigned in Court,” said a statement by spokesman for the Nigeria police, Jimoh Moshood.
Posted by Unknown at 12:19 PM