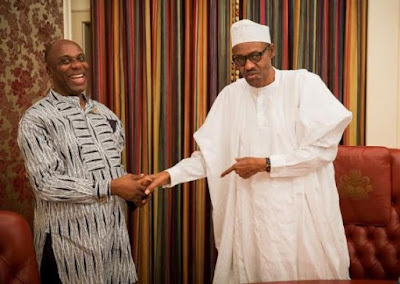 The Minister of Transportation and Director general of the Buhari campaign organization, Rotimi Amaechi has said Nigerians will enjoy 24 hours power supply if President Buhari is re-elected in 2019.
Amaechi disclosed this during an interactive session with the media in Abuja on Tuesday September 11th.
Speaking on why Buhari and the APC government deserves second term, Amaechi said;


''There is also an improvement in power. We have from 3000megawatt to 7000 but we are distributing 5000 because some of the Infrastructures are not in good state but we are slowly fixing them.

“The expectation is that it should be 24 hours power supply but there will still be a gap but if you give us a second term, that gap will be closed.”
“When Buhari came, he said no and that we cannot continue to spend anyhow. Buhari has not said people should not steal; he has rather kept quiet to see who can steal because there is a consequence for stealing.

“I don’t want to say it has stopped completely, but it has reduced. Before, there were many empty houses in Abuja. People were building and speculating that new politicians would come in and buy. But we came in, we could not buy because of the economy. So if you say Buhari has not done anything on corruption, you are being most unfair.