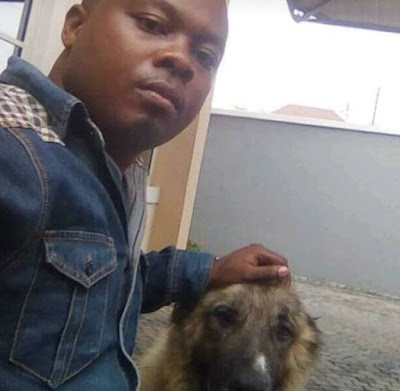 A very fresh story is brewing up on the internet, and its about a man who has made it his career to rape innocent girls, after disguising himself as a Taxi Driver, His latest victim whose friends are familiar with the Internet has just exposed, and its the man you see above..


His location is mostly in Leki/Ajah, and they are now calling on authorities before more harm is done, read her tweet below!

''The face of the guy that used to rob and rape girls in Lekki / Ajah area, my friend was robbed and raped on Monday 24th of sep 2018,she was going to Victoria island by 10pm, she requested for taxify,but non was available.
She decided to walk down the road ,igboefon junction in Lekki,a taxi stopped and asked her were she was going to ,on seeing another guy at the back of the car,the driver told her that he want to drop the guy at the next bustop, that was how she entered the car,next thing.
They brought out knife and asked her not to say a word,they took her to a bush in ajah,rapped her, gave her POS to put her ATM and pin,which she did ,they collected all her money,her phone and her gold chain.
They made calls calling one baba ,that if she shout,the will take her to that baba for ritual, pls help me share his picture ,to save people from being harmed. Any information pls call the nearest police station or u call 112.thank u..
Another girl that escaped from them, he was chatting that one from in message, that they have a party, she went with her friend, the took them to ogombo bush, luckily for them,they ran away,
When she heard about what happened to Tina, she sent me the picture ,to confirm if is the same person, and she confirmed he's one of them. 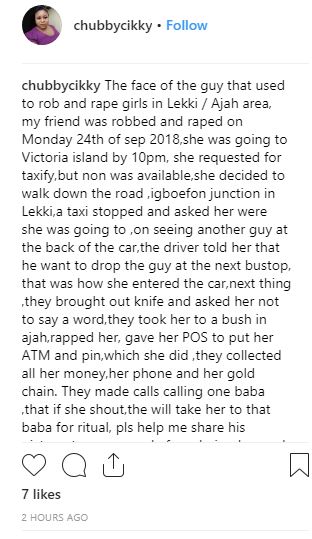