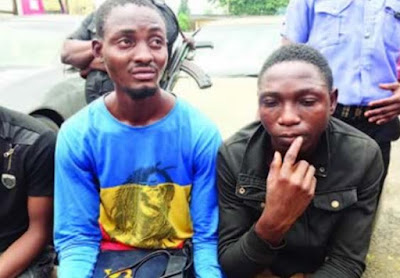 The Lagos State Police Command have arrested two teenagers for allegedly breaking into a shop on Jakande Estate, in the Ejigbo area of Lagos State, and stealing a laptop. The police also arrested two others – 27-year-old Adejagun Babatunde and 20-year-old Lawal Wasiu for allegedly receiving the stolen laptop from the teenage burglars.

The Commissioner of Police, Edgal Imohimi, on Wednesday said the case was worrisome because minors were involved.

“The command’s operatives attached to the Ejigbo Police Division on September 2, 2018, arrested two teenagers (names withheld), aged 13 and 14, who specialised in breaking into people’s shops.

“The police have arrested their adult collaborators, 27-year-old Adejagun Babatunde and 20-year-old Lawal Wasiu. The two adults bought the stolen HP laptop for N2,000 only. The adult suspects will have their day in court, while the child offenders will be handed over to the gender section for appropriate action.”

One of the teenage burglars, said he took the laptop inside an opened shop, adding that he was accompanied by his friend to a complex at Ejigbo where they were paid N2,000 for the laptop.

The second teenage suspect said he was only involved in selling the laptop.

The buyer of the laptop, Babatunde, said he got to know the boys through Wasiu.

The CP said the suspect would equally be charged to court.
Posted by Unknown at 4:37 AM