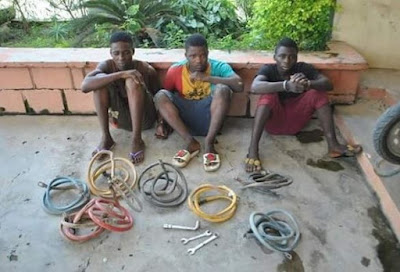 A three-man gang who vandalizes transformers in MI Wushishi, Farm Center, CKC Road Tunga, Peter Sarki Road, and Alovera Hotel Tunga, Minna has been arrested by the Police.
Spokesperson for the Command, DSP Muhammad Inna Abubakar, who confirmed the arrest on Monday, September 17, said the suspects were arrested due to spate of transformer vandalisation, theft of electrical installations and other acts of sabotage on critical infrastructures in the State.

During investigation suspects confessed to the crime. Exhibits recovered include eight (8) pieces of armored cables valued one million, two hundred naira only (N1,200,000.00). Case will soon be charged to court." Abubakar said.
Posted by Unknown at 2:54 AM