Vulcanizer Thrown Inside Jail for Stealing Church Speakers in Ibadan 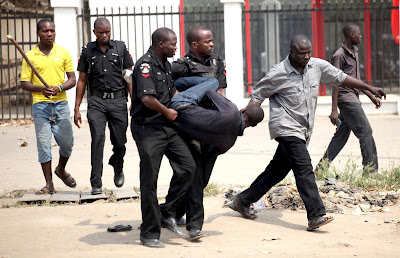 An Iyaganku Magistrates’ Court sitting in Ibadan, the Oyo state capital, on Thursday sentenced a 31-year-old vulcanizer, Mr. Sunday Dare to six months imprisonment for stealing horn speaker from a church in Ibadan.


Dare, who lived at Oloya area, Apete, a surbub of Ibadan, was arraigned on a two-count charge of forcefully entering into a building and stealing.

Police Prosecutor, Olalekan Adegbite had told the court that Dare “broke and entered” into the God Pentecostal Church, located at Yidi area at Apete around 6.20 a.m. on September 15th and made away with the items.
Adegbite said that Dare stole one Harp speaker valued at N12,000.

Adegbite described Dare as a `habitual criminal’, who had served jail terms for four times at Agodi prison.
He said that the accused was recently released from Agodi prison on July 14, after being convicted at an Iyaganku Magistrate Court 10.

Dare pleaded guilty to the charge and was subsequently convicted and sentenced to six months imprisonment.

Magistrate Olajumoke Akande, while delivering her judgement, said that the accused was found guilty on all the charges.

She said that each count attracted three-month imprisonment, without an option of fine and that the convict would serve the term with hard labour at the Agodi prison.
Posted by Unknown at 4:16 AM